The Story Behind the Symbol
Enrique "Kiki" Camarena grew up in a dirt-floored house with hopes and dreams of making a difference.

Camarena worked his way through college, served in the Marines and became a police officer. When he decided to join the U.S. Drug Enforcement Administration, his mother tried to talk him out it. "I can't not do this," he told her. "I'm only one person, but I want to make a difference."

The DEA sent Camarena to work undercover in Mexico investigating a major drug cartel believed to include officers in the Mexican army, police and government. On Feb. 7, 1985, the 37-year-old Camarena left his office to meet his wife for lunch. Five men appeared at the agent's side and shoved him in a car. One month later, Camarena's body was found in a shallow grave. He had been tortured to death. 1

Within weeks of his death in March of 1985, Camarena's Congressman, Duncan Hunter, and high school friend Henry Lozano, launched Camarena Clubs in Imperial Valley, California, Camarena's home. Hundreds of club members pledged to lead drug-free lives to honor the sacrifices made by Camarena and others on behalf of all Americans. These coalitions began to wear red badges of satin, red ribbons, as a symbol Camarena's memory. The Red Ribbon Week campaign emerged from the efforts of these clubs and coalitions.

Today, Red Ribbon Week is nationally recognized and celebrated, helping to preserve Special Agent Camarena's memory and further the cause for which he gave his life. The Red Ribbon Campaign also became a symbol of support for the DEA's efforts to reduce demand for drugs through prevention and education programs. By wearing a red ribbon during the last week in October, Americans demonstrate their ardent opposition to drugs. They pay homage not only to Special Agent Camarena, but to all men and women who have made the ultimate sacrifice in support of our nation's struggle against drug trafficking and abuse.

Check out the calendar for the dress activity
​ for each day!
This year we will pick the
TOP Wacky-Tacky Dressers
and
TOP Throwback to a Past Generation Dressers
​for Both Students and Staff
​So be sure to join in the fun!
Enter your vote in the form below! 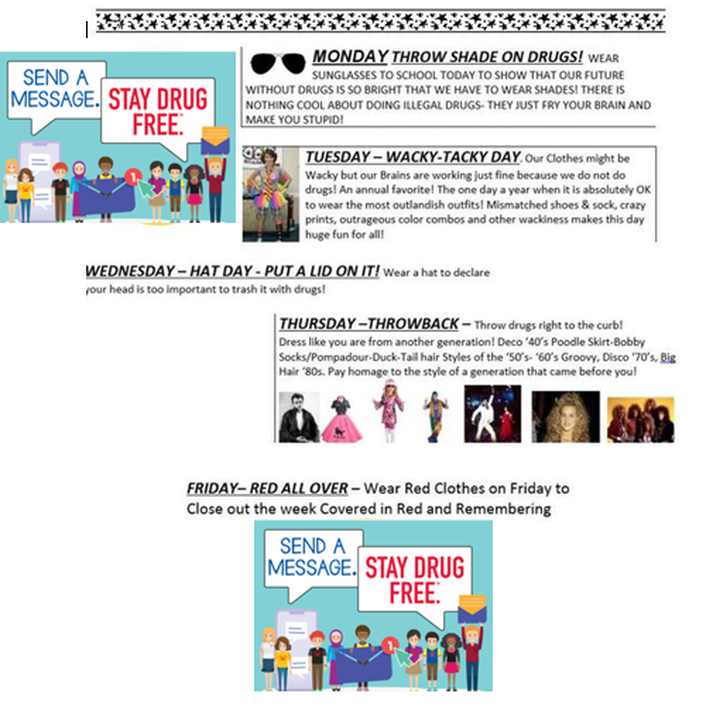 Absolutely NO pictures of drugs of any kind
​on the posters!  This is not a contest to see who can draw the best joint, bong or marijuana leaf!
The poster message should be obviously and genuinely POSITIVE!
​
Hang them on your cork strips outside your classroom!
​
​Certificates and small prizes for 1st, 2nd and 3rd place.

SIGN THE PLEDGE!
Teachers print this pledge sheet and have students discuss the significance of signing it. Why do we make pledges to ourselves?

Download File
Hang Outside your Classrooms!
Winners will get certificates and small, but meaningful prizes!
WRITING CONTEST

Say No to drugs, Say Yes to...
Students write about things that are important to say yes to!

Download File
Hang Outside your Classrooms!
Winners will get certificates and small, but meaningful prizes! ​